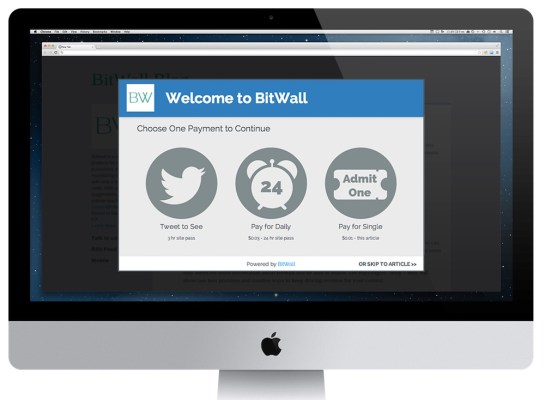 Its new owner is Watch Out, the company behind an app that sends alerts about things like product and food recalls and weather-realted emergencies. It’s not the most obvious acquirer, but the companies say BitWall can help Watch Out improve its data, payments and loyalty systems.

“We are excited to bring BitWall into the Watch Out! ecosystem,” said Watch Out CEO Michael Lucas in the acquisition announcement. “Our mission is to provide a secure consumer-protection platform while delivering hyper-targeted content when and where it matters most, whether that be a safety alert or a digital reward. BitWall and its team help us do that.”

Apparently there’s a TechCrunch connection to the story, too — BitWall co-founder and CEO Nic Meliones told me he first got connected to Watch Out at our Disrupt SF Hackathon in 2014, and he said the company has already been “a great partner” to BitWall.

I first wrote about the startup before the current craze around Bitcoin and cryptocurrency — all the way back in 2013. The idea was to give visitors different ways to access paywalled content, whether that’s making a small payment, promoting the article on Twitter or viewing an ad.

The company’s biggest win was probably a partnership with the Chicago Sun-Times in 2014, where the Sun-Times tested out a paywall that readers could bypass using Bitcoin or tweets. (The Sun-Times’ current paywall plans don’t appear to include BitWall.)

The financial terms of the deal were not disclosed. Meliones said the company’s paywall product will be shut down, with the technology diverted to a yet-to-be-announced product at WatchOut.