Facebook founder Mark Zuckerberg’s (so far) five-year project to expand access to the Internet in emerging markets makes plenty of business sense when you look at the latest report by the Pew Research Center — which shows social media use has plateaued across developed markets but continues to rise in the developing world.

In 2015-16, roughly four-in-ten adults across the emerging nations surveyed by Pew said they used social networking sites, and as of 2017, a majority (53%) use social media. Whereas, over the same period, social media use has generally been flat in many of the advanced economies surveyed.

Internet use and smartphone ownership have also stayed level in developed markets over the same period vs rising in emerging economies. 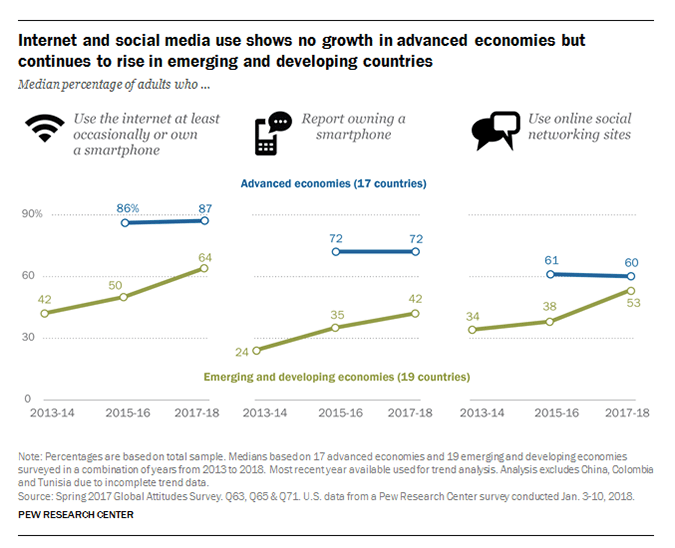 Pew polled more than 40,000 respondents in 37 countries over a roughly three month period in February to May last year for this piece of research.

The results show how developing markets are of clear and vital importance for social behemoth Facebook as a means to eke continued growth out of its primary ~15-year-old platform — plus also for the wider suite of social products it’s acquired around that. (Pew’s research asked people about multiple different social media sites, with suggested examples being country-specific — though Facebook and Twitter were staples.)

Especially — as Pew also found — of those who use the internet, people in developing countries often turn out to be more likely than their counterparts in advanced economies to network via social platforms such as Facebook (and Twitter) .

Which in turn suggests there are major upsides for social platforms getting into an emerging Internet economy early enough to establish themselves as a go-to networking service.

This dynamic doubtless explains why Facebook has been so leaden in its response to some very stark risks attached to how its social products accelerate the spread and consumption of misinformation in some developing countries, such as Myanmar and India.

Though, in the face of rising political risk attached to Facebook’s own business and growing controversies attached to various products it offers, the company has reportedly rowed back from offering its ‘Free Basics’ Internet.org package in more than half a dozen countries in recent months, according to analysis by The Outline.

In March, for example, the UN warned that Facebook’s platform was contributing to the spread of hate speech and ethnic violence in crisis-hit Myanmar.

The company has also faced specific questions from US and EU lawmakers about its activities in the country — with scrutiny on the company dialed up to 11 after a major global privacy scandal that broke this spring.

And, in recent months, Facebook policy staffers have had to spend substantial quantities of man-hours penning multi-page explanations for all sorts of aspects of the company’s operations to try to appease angry politicians. So it looks pretty safe to conclude that the days of Facebook being able to pass off Internet.org-fueled business expansion as a ‘humanitarian mission’ are well and truly done.

(Its new ‘humanitarian project’ is a new matchmaking feature — which really looks like an attempt to rekindle stalled growth in mature markets.)

Given how the social media usage gap is closing between developed vs developing countries’ there’s also perhaps a question mark over how much longer Facebook can generally rely on tapping emerging markets to pump its business growth.

Although Pew’s survey highlights some pretty major variations in usage even across developed markets, with social media being hugely popular in Northern America and the Middle East, for example, but more of a patchwork story in Europe where usage is “far from ubiquitous” — such as in Germany where 87% of people use the internet but less than half say they use social media. 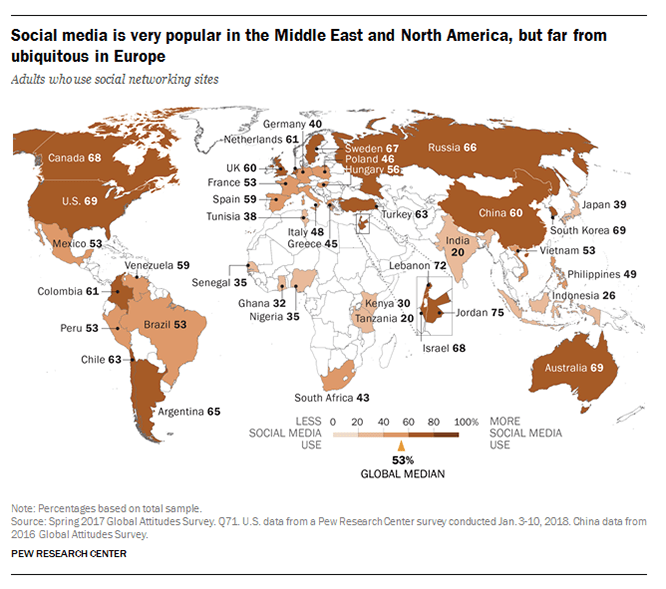 Cultural barriers to social media addiction are perhaps rather harder for a multinational giant to defeat than infrastructure challenges or even economic barriers (though Facebook does not appear to be giving up on that front either).

Outside Europe, nations with still major growth potential on the social media front include India, Indonesia and nations in sub-Saharan Africa, according to the Pew research. And Internet access remains a major barrier to social growth in many of these markets.

“Across the 39 countries [surveyed], a median of 75% say they either use the internet occasionally or own a smartphone, our definition of internet use,” it writes. “In many advanced economies, nine-in-ten or more use the internet, led by South Korea (96%). Greece (66%) is the only advanced economy surveyed where fewer than seven-in-ten report using the internet. Conversely, internet use is below seven-in-ten in 13 of the 22 emerging and developing economies surveyed. Among these countries, it is lowest in India and Tanzania, at a quarter of the adult population. Regionally, internet use is lowest in sub-Saharan Africa, where a median of 41% across six countries use the internet. South Africa (59%) is the only country in the region where at least half the population is online.”

India, Indonesia and sub-Saharan Africa are also regions where Facebook has pushed its controversial Internet.org ‘free web’ initiative. Although India banned zero-rated mobile services in 2016 on net neutrality grounds. And Facebook now appears to be at least partially rowing back on this front itself in other markets.

In parallel, the company has also been working on a more moonshot-y solar-powered high altitude drone engineering to try to bring Internet access (and thus social media access) to remoter areas that lack a reliable Internet connection. Although this project remains experimental — and has yet to deliver any commercial services.

Pew’s research also found various digital divides persisting within the surveyed countries, related to age, education, income and in some cases gender still differentiating who uses the Internet and who does not; and who is active on social media and who is inactive.

Across the globe, for example, it found younger adults are much more likely to report using social media than their older counterparts.

Pew also found significant differences in social media use across other demographic groups: Those with higher levels of education and those with higher incomes were found to be more likely to use social network sites. 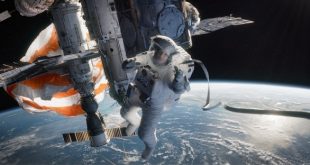