Mighty Networks, a platform designed to give creators and brands a dedicated place to start and grow communities, has closed on $50 million in a Series B funding round led by Owl Ventures.

Mighty Networks founder and CEO Gina Bianchini — who started the company with Tim Herby and Thomas Aaron — is no stranger to building nurturing environments for community building. Previously, she was the CEO and co-founder of Ning, where she led the company’s rapid growth to three million Ning Networks created and about 100 million users around the world in three years.

“Basically we have a platform for people to create communities the way that they would create e-commerce stores,” she told TechCrunch. “So what Shopify has done for e-commerce, we’re doing for digital subscriptions and digital payments where the value is around a community that is mastering something interesting or important together, and not just content alone.”

The company’s flagship Business Plan product is aimed at new creators with the goal of giving them an easy way to get started with digital subscriptions, Bianchini said. Established brands, organizations and successful creators use the company’s Mighty Pro plan to get everything Mighty Networks offers on their own branded iOS, iPad and Android apps.

Mighty Networks — which operates as a SaaS business — has seen impressive growth. In 2020, ARR climbed by “2.5x” while annual customer growth climbed by 200%. Customers are defined as paying creators who host their community, courses and events on their own Mighty Network. The company also saw a 400% annual growth in payments, or rather in subscriptions and payments where a creator or brand will sell a membership or an online course. 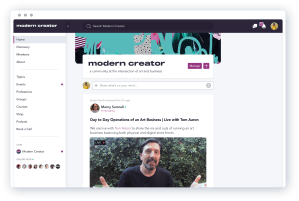 The pandemic was actually a boon to the business, as well as the fact that it launched live events last year.

“We were able to help many businesses quickly move online — from yoga studios to leadership speakers and consultants — and now that the world is coming back, they’ll be able to use the features that we’ve built into the platform from day one around finding members, events and groups near them, as well as making everything via not just the web but mobile apps,” Bianchini said.

One of the startup’s goals is to help people understand that they don’t need massive amounts of followers (such as 1 million followers on TikTok) to be successful creators. For example, a creator charging 30 people for a subscription that amounts to around $1,000 a year can still pull in $30,000 a year. So while it’s not huge, it’s certainly still substantial — hence the company’s intent to build a “creator middle class.”

“Content alone will kill the creator economy,” Bianchini said. “We can’t build a thriving creator movement on an exhausting, unfair dynamic where content creators rent audiences from big tech platforms, are required to produce a never-ending stream of content and get paid pennies for it, if they get paid at all. Creators need to own their own community on the internet, where members meet each other and get results and transformation.”

Owl Ventures Managing Director Amit Patel said his firm was impressed by Mighty Networks before it even met the company.

“No company in this space has more loyal, passionate believers, and when we saw firsthand that creators could successfully build paid communities and online courses on a Mighty Network with as few as 30 members, we wanted to be a part of unlocking this creator middle class for a million more creators,” Patel said in a written statement.

The company plans to use its new capital on product development across media types, payment options and expansion into new markets.

Earlier this month, Pico, a New York startup that helps online creators and media companies make money and manage their customer data, announced that it had launched an upgraded platform and raised $6.5 million in new funding. Essentially, the company is building what it considers to be an operating system for the creator market.

One the same day as Fortnite maker Epic Games goes to trial with one of ...