Instagram is now testing a web version of Direct messages


Insta-chat addicts, rejoice. You could soon be trading memes and emojis from your computer. Instagram is internally testing a web version of Instagram Direct messaging that lets people chat without the app. If, or more likely, when this rolls out publicly, users on a desktop or laptop PC or Mac, a non-Android or iPhone, or that access Instagram via a mobile web browser will be able to privately message other Instagrammers.

Instagram web DMs was one of the features I called for in a product wishlist I published in December alongside a See More Like This button for the feed and an upload quality indicator so your Stories don’t look crappy if you’re on a slow connection.

A web version could make Instagram Direct a more full-fledged SMS alternative rather than just a tacked-on feature for discussing the photo and video app’s content. Messages are a massive driver of engagement that frequently draws people back to an app, and knowing friends can receive them anywhere could get users sending more. While Facebook doesn’t monetize Instagram Direct itself, it could get users browsing through more ads while they wait for replies. 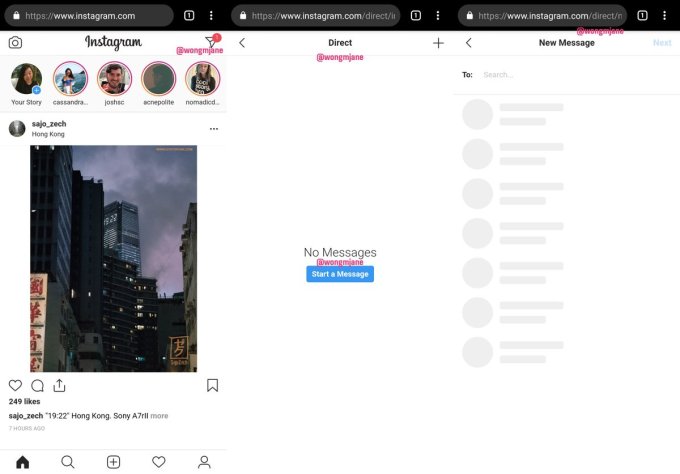 Given Facebook’s own chat feature started on the web before going mobile and getting its own Messenger app, and WhatsApp launched a web portal in 2015 followed by desktop clients in 2016, it’s sensible for Instagram Direct to embrace the web too. It could also pave the way for Facebook’s upcoming unification of the backend infrastructure for Messenger, WhatsApp, and Instagram Direct that should expand encryption and allow cross-app chat, as reported by the New York Times’ Mike Isaac.

Mobile reverse-engineering specialist and frequent TechCrunch tipster Jane Manchun Wong alerted us to Instagram’s test. It’s not available to users yet, as it’s still being internally “dogfooded” — used heavily by employees to identify bugs or necessary product changes. But she was able to dig past security and access the feature from both a desktop computer and mobile web browser.

In the current design, Direct on the web is available from a Direct arrow icon in the top right of the screen. The feature looks like it will use an Instagram.com/direct/…. URL structure. If the feature becomes popular, perhaps Facebook will break it out with its own Direct destination website similar to https://www.messenger.com which launched in 2015. Instagram began testing a standalone Direct app last year, but it’s yet to be officially launched and doesn’t seem exceedingly popular.

Instagram did not respond to requests for comment before press time. The company rarely provides a statement on internal features in development until they’re being externally tested on the public, at which point it typically tells us “We’re always testing ways to improve the Instagram experience.” [Update: Instagram confirms to TechCrunch it’s not publicly testing this, whch is its go-to line when a product surface that’s still in internal development.]

After cloning Snapchat Stories to create Instagram Stories, the Facebook-owned app decimated Snap’s growth rate. That left Snapchat to focus on premium video and messaging. Last year Instagram built IGTV to compete with Snapchat Discover. And now with it testing a web version of Direct, it seems poised to challenge Snap for chat too.