Hands on with the Echo Dots Kids Edition


Earlier this year, Amazon introduced an Echo Dot for kids, with its $80 Echo Dot Kids Edition device, which comes in your choice of a red, blue, or green protective case. The idea is to market a version of Amazon’s existing Dot hardware to families by bundling it with an existing subscription service, and by throwing in a few extra features – like having Alexa encourage kids to say “please” when making their demands, for example.

The device makes sense in a couple of scenarios – for helicopter parents who want to fully lock down an Echo device before putting it in a kid’s room, and for those who were in the market for a FreeTime Unlimited subscription anyway.

I’ve been testing out an Echo Dot Kids Edition, and ran into some challenges which I thought I’d share. This is not a hardware review – I’m sure you can find those elsewhere.

As a parent of an 8-year old myself, I’ve realized it’s too difficult to keep her from ever hearing bad words – especially in music, TV and movies – so I’ve just explained to her that while she will sometimes hear those words, that doesn’t mean it’s okay to say them. (We have a similar rule about art – sometimes people will be nude in paintings, but that doesn’t mean it’s okay to walk around naked all the time.)

Surprisingly, I’ve been able to establish a level of shame around adult and inappropriate content to the point that she will confess to me when she hears it on places like YouTube. She will even turn it off without my instruction! I have a good kid, I guess.

But I understand some parents will only want kids to access the sanitized version of songs – especially if their children are still in the preschool years, or have a tendency to seek out explicit content because they’re little monsters.

Amazon FreeTime would be a good option in that case, but there are some caveats.

For starters, if you plan on using the explicit language filter on songs the Echo Dot plays, then you’re stuck with Amazon Music. While the Echo Dot itself can play music from a variety of services, including on-demand offerings from Pandora and Spotify, you can’t use these services when the explicit filter is enabled as “music services that do not support this filter will be blocked,” Amazon explains.

We’re a Spotify household, so that means my child’s favorite bedtime music playlist became unavailable when we swapped out her existing Echo Dot for the Kids Edition which had the explicit filter enabled. 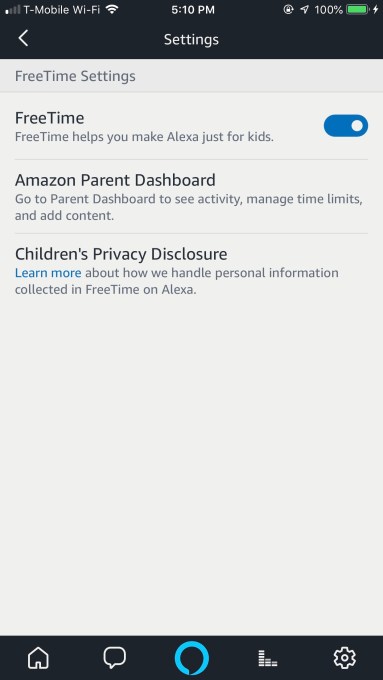 Above: Parent Dashboard? Where? Maybe a link would help?

You can disable the explicit filter from the Parent Dashboard, but this option is inconveniently available just via the web. When you dig around in the Alexa app – which is where you’d think these controls would be found, there’s only a FreeTime On/Off toggle switch and instructions to “Go to the Parent Dashboard to see activity, manage time limits, and add content.”

It’s not even hyperlinked!

Then to actually disable the filter, it’s several more steps. 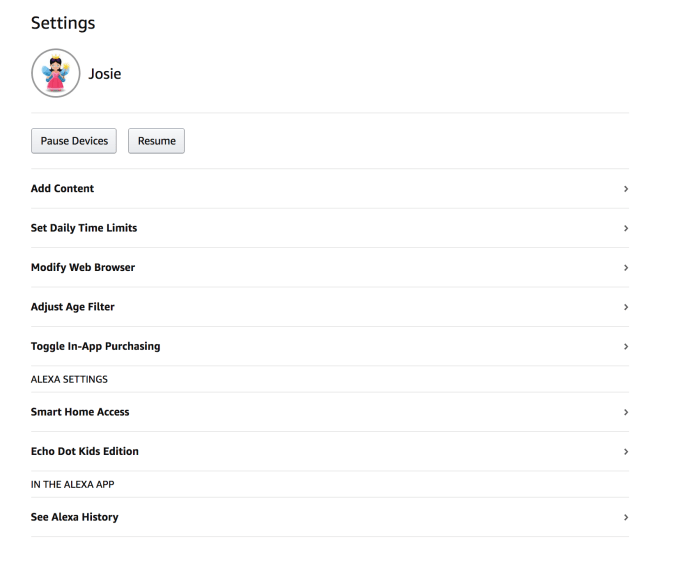 You’ll click the gear icon next to the child’s name, click on “Echo Dot Kids Edition” under “Alexa Settings,” then click “Manage Music.” Here, you can turn the switch on or off.

If you don’t have a subscription music service, the Echo Dot Kids Edition also ships with access to ad-free kid-safe stations on iHeartRadio Family.

Another issue with the way FreeTime works with Alexa, is that it’s not clear that nearly everything your child accesses on the device has to be whitelisted.

This leads to a confusing first-time user workflow.

Likely, you’ll start by browsing in the Alexa app’s Skills section or the Skills Store on the web to find some appropriate kid-friendly skills for your child to try. For example, I found and enabled a skill called “Math Facts – Math Practice for Kids.”

But when I instructed “Alexa, open Math Facts,” she responded, “I can’t do that.”

She didn’t say why.

As I hadn’t used FreeTime in quite a while, it didn’t occur to me that each Alexa skill would have to be toggled on – just like the third-party apps, videos, books and audiobooks the child has access to that didn’t ship with FreeTime Unlimited itself.

Instead, I mistakenly assumed that skills from the “Kids” section of the Skills store would just work.

Again, you’ll have to know to go to parents.amazon.com to toggle things on.

And again, the process for doing so is too many clicks deep in the user interface to be immediately obvious to newcomers. (You click the gear by the kid’s name, then “Add Content” – not “Echo Dot Kids Edition” as you might think! Then, on the “Add Content” screen, click over to the “Alexa Skills” tab and toggle on the skills you want the child to use.) 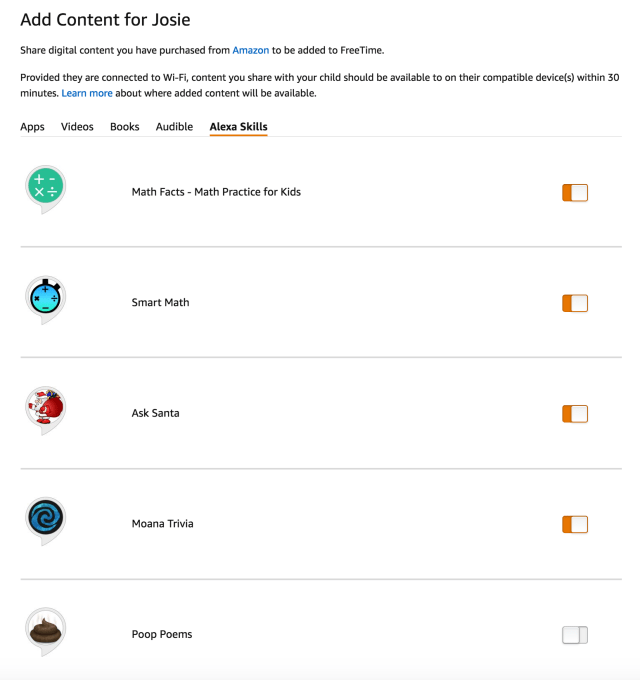 The issue with this system is that it prevents Echo Dot Kids Edition users – kids and adults alike – from discovering and enabling skills by voice. And it adds an unnecessary step by forcing parents to toggle skills on.

After all, if the parents are the ones signing in when visiting the Skills store in-app or on the web, that means they’re the ones choosing to enable the Skills, too.

And if they’re enabling a skill from Kids section, one would assume it’s for their kids to use on their device!

The problem, largely, is that FreeTime isn’t really integrated with the Alexa app. All of this – from explicit content filters to whitelisting skills to turning on or off calling, messaging and drop-ins – should be managed from within the Alexa app, not from a separate website.

To make matters more confusing is the fact that Amazon has partnered with some kids skill publishers, similar to how it partnered with other content providers for apps and movies. That means there’s a list of skills that don’t appear in your Parent Dashboard that also don’t require whitelisting.

But it’s confusing that you can immediately use these skills, and not others clearly meant for kids. You end up feeling like you did something wrong when some skills don’t work, before you figure out this whole whitelisting system. It’s also frustrating that there’s no information on the FreeTime Parents dashboard about the nature of your subscription.

You can’t confirm that you’re currently subscribed to the paid product known as FreeTime Unlimited. You can’t see when that subscription expires, or when your first free year is up. It’s unclear if you’ll just be charged, or when that will take place. And there’s no toggle to turn the subscription off if you decide you no longer need it.

Instead, you can only “modify” which credit card you use with Amazon’s 1-click. Seriously. That’s it.

Above: want to manage your subscription?

Below: hahaha, good luck with that!

I still don’t know where to turn this subscription off – I guess the option to disable it doesn’t even appear until your free year is up? (Even clicking on “FreeTime Unlimited” from Amazon.com’s subscription management page routes you back to this useless Parent dashboard page for managing your 1-Click settings.)

That said, if you are in the market for both a FreeTime Unlimited subscription and an Echo Dot, you may as well buy the Kids Edition.

The service by itself is $2.99 per month for Prime members (for one profile) or $4.99 per month for non-members. It’s more if you buy the Family subscription. Meanwhile, the regular 2nd gen Echo Dot is currently $49.99. So you’re basically looking at $50 + $36/year for FreeTime Unlimited if you bought these things separately as a Prime member.

The Echo Dot Kids Edition comes with one year of FreeTime Unlimited and is $79.99. So you’re saving a tiny bit there. Plus, you can always turn FreeTime off on the device, if you’d rather just use the kids Echo Dot as a regular Echo Dot – while still getting a free year of FreeTime for another device, like the kid’s iPad.

Still, watch out because Echo Dot often goes on sale – and probably will be on sale again for Prime Day this summer. Depending on the price cut it gets, it may not be worth it to buy the bundle.

There are other perks that Amazon tries to use to sell the Echo Dot Kids Edition to families, but the most notable is “Magic Word.”

This feature turns on when FreeTime is enabled, and thanks kids for saying “please” when they speak to Alexa. Yes, that seems like a small thing but it was something that a lot of parents were upset about. They thought kids were learning bad manners by barking commands at Alexa.

I don’t know about that. My kid seems to understand that we say “please” and “thank you” to people, but Alexa doesn’t get her feelings hurt by being told to “play Taylor Swift.” But to each their own!

This feature will thrill some parents, I’m sure.

Parents can also use FreeTime to pause the device or configure a bedtime so kids don’t stay up talking to Alexa, but honestly, LET ‘EM.

It’s far better than when they stall bedtime by badgering you for that extra glass of water, one more blanket, turn on that light, now crack the door…a little more…a little less…Honestly, escaping the kid’s room at bedtime is an art form.

If Alexa can keep them busy and less afraid of the dark, I’m calling it a win.

FreeTime with the Echo Dot Kids Edition also lets you set up “Character Alarms” – meaning, kids can configure Alexa to wake them up with an alarm click featuring characters from brands like Disney and Nickelodeon.

This is hilarious to me.

Because if you have a kid in the preschool to tween age range who actually requires an alarm clock to wake up in the morning instead of getting up at the crack of dawn (or maybe one who has gone through years of training so they DON’T ALSO WAKE YOU UP AT THE CRACK OF DAWN OH MY GOD) – then, I guess, um, enjoy character alarms?

I’m sure somebody needs this.

Sorry for laughing. But please explain how you’ve taught your children to sleep in? Do they go to bed at a decent hour too? No seriously, email me. I have no idea.

The Echo Dot Kids Edition can also work as a household intercom, but so do regular Echo devices.

You can turn off voice purchasing on the Kids Edition, but you can do that on regular devices, too (despite what Amazon’s comparison chart says.)

Plus, kids can now control smart home devices with the Echo Dot Kids Edition – a feature that shamefully wasn’t available at launch, but is now.

And that cute protective case? Well, a regular Echo Dot is actually pretty sturdy. We’ve dropped ours probably a dozen times from dresser to floor (uncarpeted!) with no issues.

I like how Amazon tries to sell the case, though: 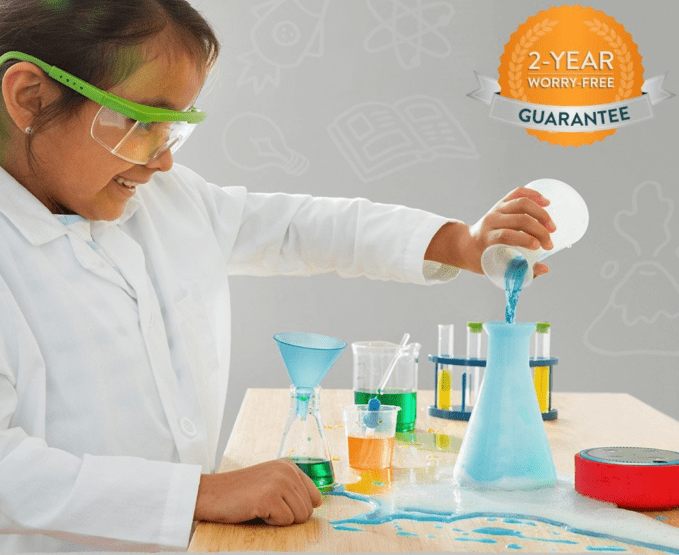 I guess if your kid plans to do CHEMISTRY EXPERIMENTS by the Echo Dot, you may need this.

In reality, the case is just cute – and can help the Echo better match the kid’s room.

The Echo Kids Edition, overall, is not a must-have device. You’ll have more flexibility with a regular Echo and a little old-school parenting. 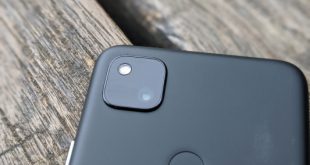 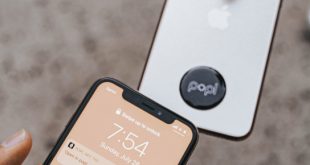 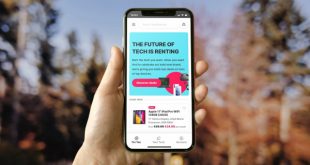