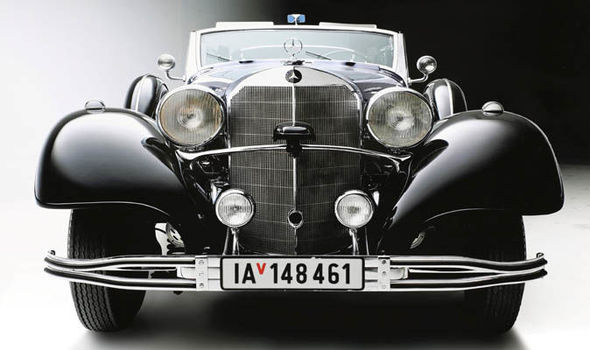 The 1939 Mercedes-Benz 770 Grosser Offener Tourenwagen is being described as “the most historically significant automobile ever offered for public sale”.

It was the most technologically advanced car of its time – a beautifully-built four-seat convertible used for the state visit of Mussolini and 1940 victory parade in Berlin after the Nazis defeated the French.

The Mercedes was fitted with a 7.7-litre engine which gave the enormous limo a top speed of more than 100mph. It was armour plated and boasted 30mm thick bulletproof glass.

It was last used on parade at the Old Reichstag on May 4, 1941, where Hitler celebrated the defeat of Yugoslavia and Greece. 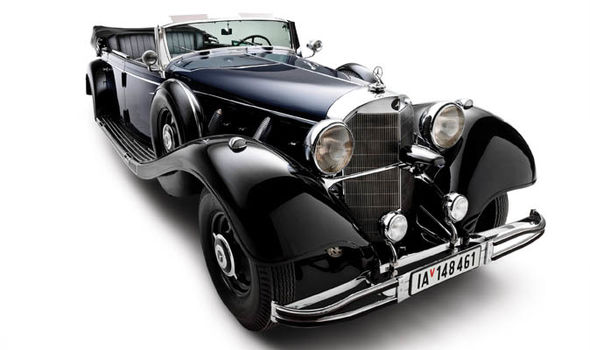 The Mercedes has a 7.7-litre engine which gave the enormous limo a top speed of over 100mph


The US Army seized the car after the war and it is one of just three Mercedes-Benz 770 Grosser Offener Tourenwagens in private hands.

Worldwide Auctioneers will be selling the Mercedes at its sale in Arizona, US, on January 17.

The auction house has not given the stunning car a public estimate but in 2004 it was sold for a staggering $18 million.

Rod Egan, principal of Worldwide Auctioneers, said: “It is very hard to determine market value on such an important and singular piece of history.

“This car, without any history, is likely a $5 million car.

“It is safe to say that in general, significant provenance and history tend to command a multiple of the value of any given rare car.

“What is that multiple is in this case – two times, three times, ten times? Who knows – that’s up to the world market to decide and precisely what will happen at the auction.

“We look forward to finding out as much as everyone else does for sure.”

And ten per cent of the proceeds from the sale will go to The Simon Wiesenthal Center – a move which “would make Hitler turn in his grave if he knew”, according to the charity’s founder.

Germany was struggling at this stage of the war following its disastrous invasion of the USSR and British General Montgomery’s success against Rommel at El Alamein.

The Americans were also causing heavy damage to key German industrial facilities and the time for lavish parades had passed for Hitler.

As a result, the high-profile use for the Nazi’s Mercedes motor pool declined. 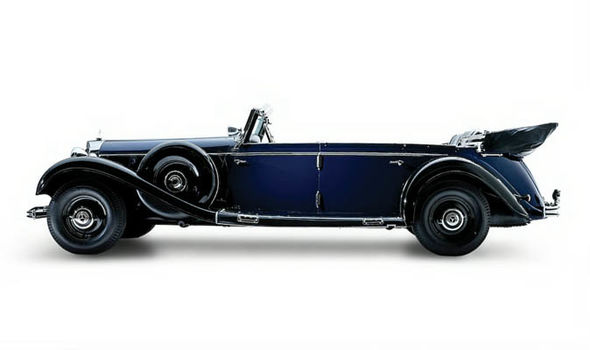 When the war was over, the Mercedes was seized by American forces and placed under the control and use of the US Army Military Police stationed in Le Havre, France.

The Mercedes was shipped to the USA in 1946 and bought by tobacco tycoon Vander Elst, who soon sold it for $1,800 of tobacco to Tom N. Austin, another smoking industry businessman.

Mr Austin kept the car until 1949 when he donated it to the Veterans of Foreign Wars charity.

The car eventually fell into disuse and was placed in a lock-up until 1976 when it was bought by businessmen and classic car hunters Steve Munson and Joe Ogden, of Pewee Valley, Kentucky near Louisville.

It had a number of US owners before being sold to a European collector in 2004 as part of a 21-car package of significant Mercedes-Benz vehicles.

Mercedes built 88 Grosser 770 models until the programme was cancelled in 1943. 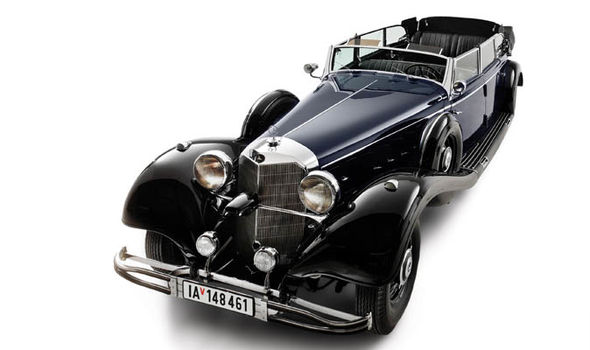 All bodies were produced by the renowned craftsmen at Mercedes-Benz’s Sindelfingen Werks to impeccable hand-built standards.

The model being sold is the last of the eight “pre-series” examples of the W150-generation 770K models. It is one of five surviving Offener Tourenwagens and one of three in private hands.

Ten per cent of the proceeds from the sale of Hitler’s Mercedes will go to charities which are dedicated to educating people about the holocaust.

One of the charities is the Simon Wiesenthal Center, an organisation named after the world’s most famous Nazi hunter who brought more than 1,100 Nazi war criminals to justice.

Rabbi Marvin Hier, founder and dean of the Center, said: “Adolf Hitler would turn over in his grave if he knew that ten per cent of the sale of his car was donated to the Simon Wiesenthal Center.

“On a daily basis, the Center is on the frontlines confronting bigots and anti-Semites around the world.

“The Center’s Jerusalem office, which for more than forty years has tracked Nazi war criminals around the world is currently assisting the German government in apprehending war criminals on new cases of war criminals who were members of the Nazi murder squads recently discovered living in Germany.”

Previous With WPA3, Wi-Fi security is about to get a lot tougher
Next EZVIZ’s ‘Lookout Smart Door Viewer’ turns a peephole into a smart video doorbell